As shown below, when you Tap a Thought it moves to the center and it becomes the Active Thought. 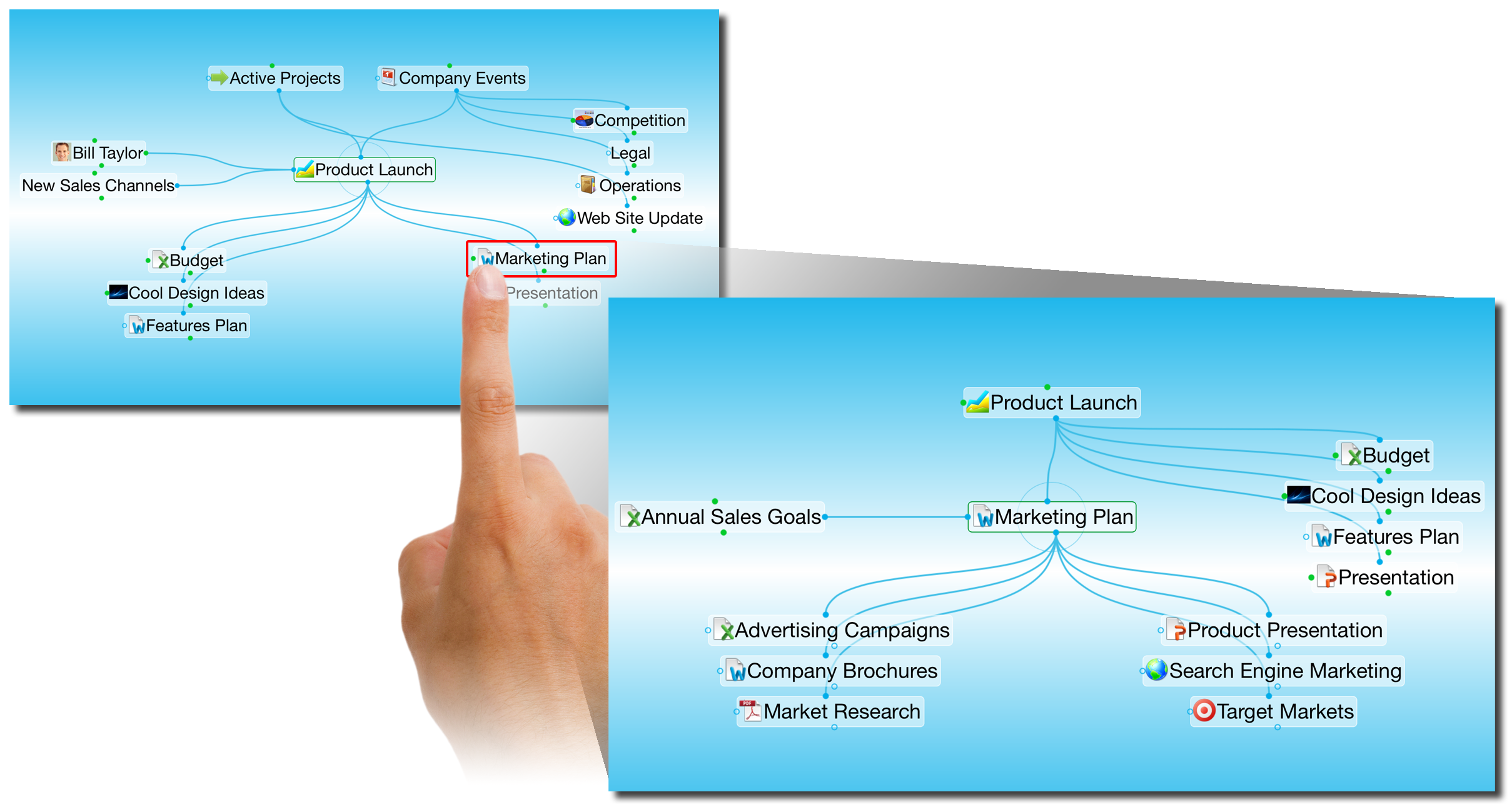 Tapping on Marketing Plan moves it to the center of your Brain. It is now your Active thought. 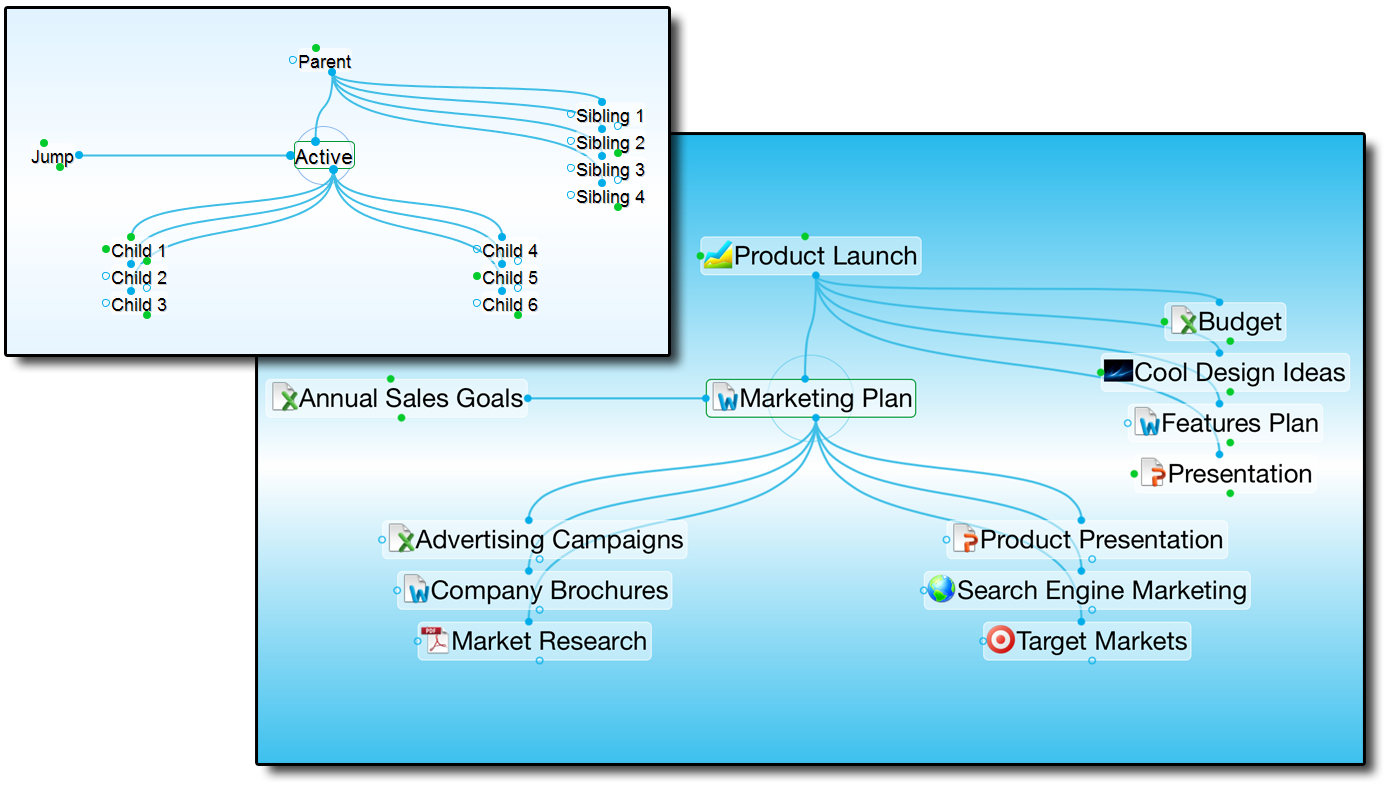 All Thoughts fall under one of three main relationships; Child, Jump, or Parent. There are also Sibling Thoughts, which are Child Thoughts that share a common Parent.

Jump Thought - Jump Thoughts are related to the active Thought but are neither child nor parent topics. They appear in the jump zone to the left of the active Thought. Jump Thoughts have an "equal weight" relationship with the Thought to which they are related. For example, as shown above, "Marketing Plan" has the various categories such as "Market Research", "Target Markets", "Company Brochures" and "Product Presentation" linked as child Thoughts since they are subcategories of Marketing Plan. "Annual Sales Goals" directly affects the Marketing Plan, but it is not a subcategory itself. Therefore, it makes a perfect jump Thought-related, but not part of the main Thought grouping.

There are no rules governing the relationships between Thoughtsï¿½whatever makes sense to you is the way your Brain ought to be organized. The three primary relationship types - child, parent, and jump - can be used to express different types of relationships. Sibling is a relationship that is derived from child/parent relationships.

The examples in this section can help you understand the variety of relationships and how they are used. The core concepts behind each type of relationship are as follows:

Parents: Parent relationships are usually used to link more general information. Parents can also be thought of as higher level categories to classify groups of information. They serve to indirectly connect their child Thoughts as siblings.

Jumps: Jump relationships are usually used to link two pieces of information that are exclusively related, meaning that the two items are related to each other but neither represents a group that the other is a part of.

Letï¿½s move on to an example to explore these relationship types. Imagine that you are the owner of a company and you are reviewing personnel files. Each employee has a file. You decide it makes sense to organize your employees by department. Your Brain is called My Brain. From My Brain, you create a child Thought called My Company (see Figure 28). My Brain is now My Companyï¿½s parent Thought. You create four child Thoughts from My Companyï¿½Manufacturing, Sales, Service, and Operations. These departments are sibling Thoughts of each other. 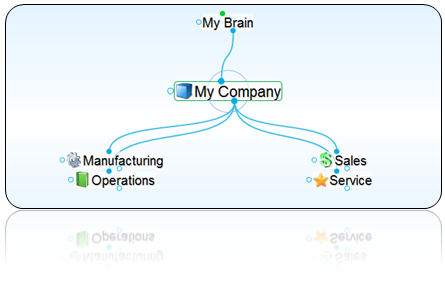 Bob is under both Manufacturing and Sales
If you own more than one company, but have one accountant for all of them, you might want to make a Thought called Accountant and link it as a jump Thought to each company 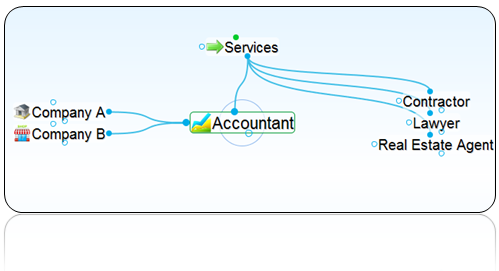 Jump Thoughts to the Active Thought 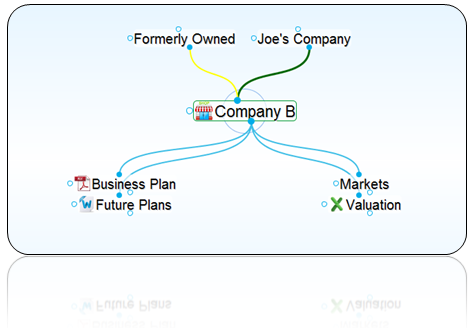 Because Joe wants to avoid a conflict of interest, the acquired company (My Other Company) no longer uses the same accountant. So its jump gate is hollow, while its siblingï¿½s jump gate (My Company) maintains that Link and is filled. As you use TheBrain, you will develop a sense of the types of relationships you wish to make between Thoughts. It is always possible to change relationships.

It is tempting to view Thought relationships as families, and indeed these different parts of your Brain are types of families, with their ancestry visually spread before you, represented by subjects and categories. But unlike human families, a child Thought can be a parent of one of its siblings and a Thought can have more than two parents.

The complex relationships you can form in TheBrain are the source of its power. Letï¿½s consider sibling Thoughts that also share a parent/child relationship.

Aristotle was a student of Plato, so you may want to make Aristotle not only a child of Philosophy, but of Plato, so that when youï¿½re working with Aristotle, Plato is only a Thought away. 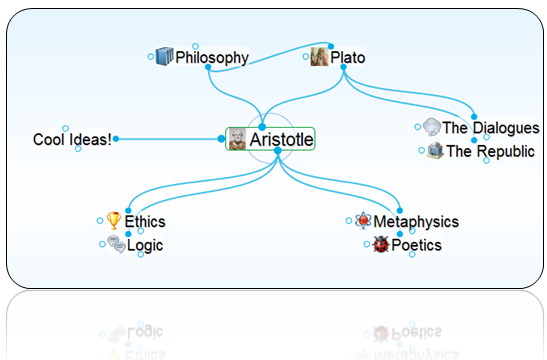 Notice that when Philosophy and Plato are in Aristotleï¿½s parent zone, their relationship (Philosophy is a parent Thought of Plato) is shown by the line linking the child gate of Philosophy to the parent gate of Plato. Clearly, TheBrain is a powerful method of organizing ideas and information. No hierarchical file structure can provide as much cross-referenced information at a glance. And our example is pretty basicï¿½a fully developed Brain can hold many more relationships and much more information.